Nkawkaw is a bustling and full town at the northern part of Ghana’s Eastern Region. I mention that it is bustling and full because these are more recent developments in the town’s history. In the not too far away past (I should have asked for dates!) Nkawkaw was rural. Now, though, it is properly no longer kurasi (a village) but a proper town, with parts as busy and commercial as Madina. Here’s a look at part of the commercial center. 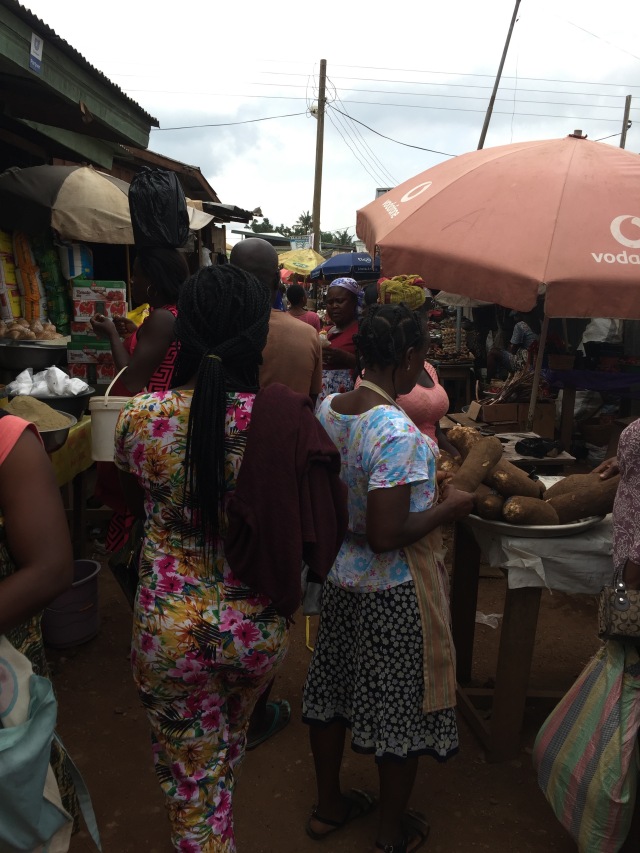 Loretta and I woke early for this trip (4 am!) and reached our bus station around six. There we had an interesting experience with some bus drivers. We stepped into the first bus that was headed to Nkawkaw that we could find. After sitting down and paying for our tickets, we quickly realized that the bus was going to take a while to fill. The buses (and trotros) in this part of Ghana do not leave by appointment or time, but set out for their destinations only once all seats are taken. After waiting for ten or fifteen minutes in the bus, and watching a single person come to fill one of the 20 remaining seats, we went to talk to the driver. The conversation went something like this (Loretta spoke):

L:“We want to get to Nkawkaw soon because we are not staying there for long. The bus isn’t really filling. Can we have our money back? We would like to take a different bus?”

Driver: “Oh, the bus will fill soon! Come back to me in fifteen minutes and if it’s not full I will return your money to you.”

* Twenty minutes later, when the bus is less than ¼ full

L: “The bus is still empty. Can we have our tickets back?”

The Man: “It is not for man to change his lot in life. Sometimes the angels give us things that we just have to receive. You can’t just hop from one bus to another.”

L: “We were told to come to you after 15 minutes, and that we could get refunded.”

TM: “Do you believe in God? Then go sit back down.”

We were both pretty upset at this point, and there was further discussion. Long story made slightly more short, we again took our seats and waited on the bus until 7:40am (at which point more than half of the seats still remained) and then abandoned our seats for a new bus that (low and behold!) had only two seats remaining. We then set out to Nkawkaw.

The trip was fascinating. With our Uncle Antwi, we traveled to Obo (a short drive from Nkawkaw), which rests tucked away at the top of a mountain. Obo is one of 17 towns for the Kwahu people, and has been an important place for my family for generations (my grandmother recalls going to Obo for major holidays and festivals as a child). In Obo, we visited  the house my mother (and Loretta’s mother) lived in as children. This was referred to by almost all as “my home.” In Obo, I also got to see the home of our current head of household. Every forty days, the head of households will gather and offer an offering to our ancestors in that house with gin. Uncle Antwi provided a detailed cultural and historical lesson in this place.

We also got to meet lots of relatives and family friends. This included my 97 year old grandmother! Two other relatives who I had never met saw me and pronounced before anyone said a word that I was my mom’s daughter. It was startling and enchanting to be known in that way.

Unlocking the door to my mother’s old home 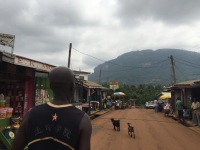 In the streets of Obo